Posted on September 24, 2014 by thepaddingtonfoodie 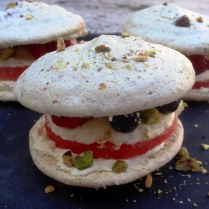 Today’s post continues with my watermelon theme. A couple of weeks ago my very good friend Susan introduced me Black Star Pastry’s magnificent Watermelon Cake. A light as air layered confection of almond dacquoise and rosewater infused berries, watermelon and cream. The flavours may be a little on the unusual side, but  work well together and are absolutely divine. Floral, fresh and vibrant, with more than a passing nod to the Middle East. Not at all what I expected when it was first described to me. Susan knows me well. Having piqued my interest, she threw down the gauntlet; what would my reinterpretation be?

For those of you who are curious, here is a photo of the original slice that inspired this post. If you are lucky enough to live in Sydney, you can visit their bakery and cafe stores in inner city Newtown and  Rosebery.  Or check out their website at http://www.blackstarpastry.com.au. 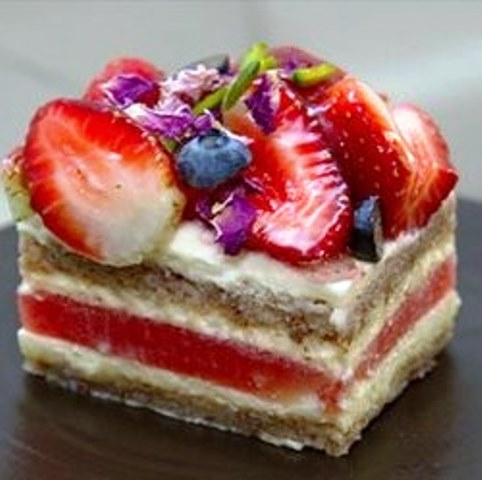 But wait there’s more. A quick search of the world wide web revealed that in December 2010 Black Star’s original Watermelon Cake recipe was published in the Australian Gourmet Traveller magazine courtesy of the Fare Exchange.

Never one to shy away from a challenge I carefully read the recipe and considered my options. Given that I’m certainly no pastry chef (far from it in truth) I decided to deconstruct that cake layer by layer into something a little more casual and easy to prepare.  My version uses crisp and crunchy individual pistachio dacquoise to top and tail soft, fragrant layers of rose scented watermelon, berries and cream. Whilst the original flavour notes remain intact, the finished product does bear an uncanny resemblance to an over sized but nevertheless delicious macaron.

To give my rose scented cream a little more structure so that it would not ooze and spread I used a combination of marscapone and thickened cream with the teeniest, scant pinch of xantham gum added to the mix. I’d read somewhere that xantham gum was used in molecular gastronomy to stabilise ingredients. It seems it’s also used extensively in commercial preparations of ice creams, sorbets and panacotta. I’ve been dabbling in gluten free baking lately, and having a packet of xantham gum on hand thought why not see what happens. A little goes a long, long way and by happy accident I discovered my cream filling had sufficient structure that all the elements of the dessert could be thrown together at a moment’s notice without the need for a lengthy chill in the refrigerator.

Constructing the pistachio dacquoise stacks is far less labour intensive than it sounds in the recipe. Making sure the rosewater infused fruit is dry is key, and I used a liberal sprinkling of almond meal between each layer to absorb any errant moisture.

All in all, the consensus was these were a resounding success. For an even simpler dessert you could consider layering the rose scented watermelon, berries and marscapone cream in parfait glasses with crushed amaretti. The possibilities are endless, but thank you Susan and  Black Star Pastry for the incredible inspiration.

I have started this recipe with the final assembly stage as this is a layered dessert and it made more sense to set it out this way. Instructions for each of the component parts; the pistachio dacquoise, rose water marscapone cream, macerated watermelon and berries, follow separately.

PREHEAT oven to 160 C. Line 3 baking trays with non-stick baking paper. Using a 7 cm diameter metal food presentation or tart ring, draw 6 circles on each. Set aside.
DRY  roast the pistachios in a heavy based pan until golden brown and fragrant. Remove to a paper towel lined plate and set aside to cool.
FINELY  grind one cup of the pistachios with icing sugar. Roughly chop the remaining half cup pistachios. Set aside for later.
BEAT egg whites in a clean, dry bowl until firm peaks form. Gradually add caster sugar, 1 tablespoon at a time, until the sugar dissolves and the mixture is thick and glossy.
GENTLY fold in the cream of tartar, vanilla extract and ground pistachios. Divide the meringue mixture evenly among the prepared trays using the back of a spoon to smooth the surfaces. Alternatively if you prefer to use a piping bag, attach a plain tip to your bag, fill with the dacquoise mixture and pipe  the meringue around the circumference of each circle, spiralling inward, filling the circles.
SPRINKLE the discs with 1/4 cup of the remaining chopped pistachios (the rest will be used as a garnish to finish the dessert. Dust the circles with a little more  pure icing sugar.
PLACE the trays in the oven and bake for 15 minutes, or until lightly golden. Turn off oven and leave the trays in the cooling oven for an hour.
REMOVE trays from oven. Allow the dacquoise discs to cool completely before gently peeling them away from the baking paper.store in an airtight container for up to three days until ready to use.

Whisk cream, mascarpone and sugar together in a bowl until light soft peaks form. Sprinkle over xantham gum if using Then gradually add  rosewater, whisking until stiff peaks form being careful not to over-whisk.

CUT watermelon into two 3 cm thick slices. Using a 7 cm food preparation or tart ring stamp out two watermelon discs out of each slice.
SLICE each of the four discs in half horizontally so you end up with eight perfectly round watermelon slices.
ARRANGE watermelon slices in a single layer on a wire rack. Sprinkle with rosewater, then scatter with sugar. Stand to infuse for 30 minutes, then pat dry with absorbent paper towels.

COMBINE berries, rosewater and sugar in a bowl, toss to combine and set aside for at least 15 minutes.
PLACE berries into a fine mesh sieve and strain over a bowl just before assembling the cakes.