Let Them Eat Cake. A Little Taste Of France. Madeleines With Browned Butter and Lime.

Posted on May 21, 2015 by thepaddingtonfoodie 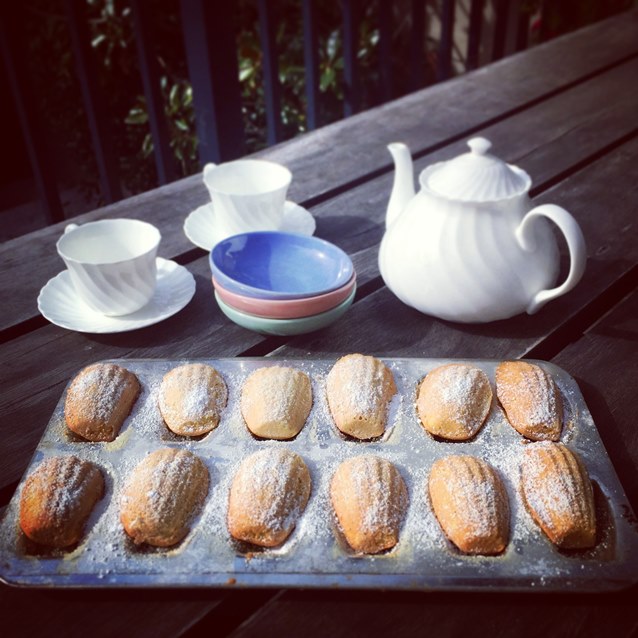 Rummaging through the pantry cupboard, I chanced upon my pretty scallop edged madeleine trays. Relics of a long forgotten past. It must be ten years since I used them last.  I well remember the thrill of the hunt for those prized metal trays. Amidst a sea of modern rubber silicon versions which to my mind, at the time, simply wouldn’t do.

Petites Madeleines. Rich, plump and buttery scallop edged sponge cakes. A little taste of France. Simply concocted from staple pantry ingredients – sugar, butter, eggs and flour.  Flavoured by a deep rich nutty beurre noisette. Scented by citrus zest. Introduced to the  Court of Versailles by Louis XV’s wife Marie. Eponymously named after Madeleine, a young maid from the town of Commercy who baked the cakes for Marie’s father, the Duke of Lorraine. Immortalised by the French writer Proust in his tome Remembrance Of Things Past as a “…little scallop-shell of pastry, so richly sensual under its severe, religious folds”. 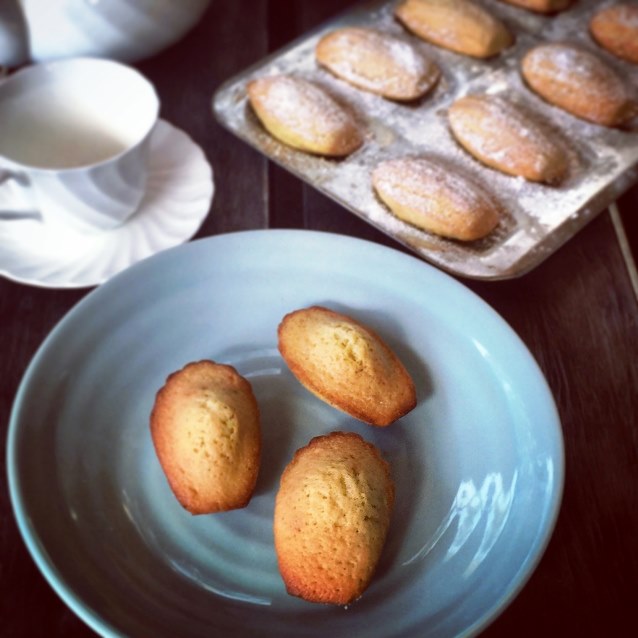 Enamoured as I am by all things French, I do remember I used to bake these little cakes with their distinctive humped backs quite a lot. Almost too much. One of the secrets to a gorgeously soft and fluffy madeleine was to allow is the batter to chill in the refrigerator for at least an hour before baking. Somewhere along the line (most likely by accident) I discovered that overnight was better, so took to making up the batter the night before. Next morning my madeleines could be freshly baked. At a moment’s notice. Without fail these delicate little beauties would rise to the occasion in just eight minutes in my hot oven. A huge bonus when baking for a busy household.

No doubt we overdosed on their deliciousness one time too often. Sadly, to the extent that something that was meant to be special suddenly became commonplace and under appreciated. Not surprisingly my madeleine baking ground to a halt and, over time,  those metal trays were pushed to the darkest depths of the pantry cupboard. A decade later, what’s old is new again. The time has finally come to resurrect those tins with a browned butter and lime rendition of those soon to be loved once more petites madeleines. 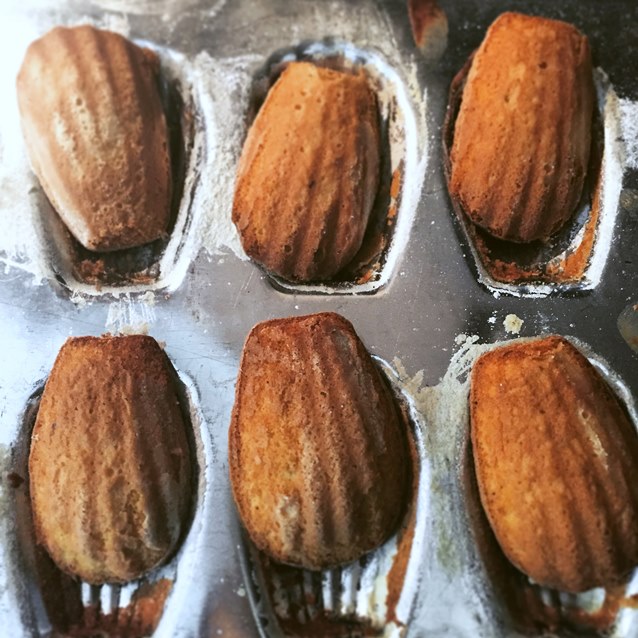 MELT butter in a small saucepan over medium heat in a heavy saucepan, stirring frequently until the mixture bubbles and foams, and milk solids begin to separate. Continue to cook until nut brown. Remove from heat and set aside to cool. If you prefer these cakes are also delicious made with melted butter – so feel free to skip the browning of the butter step.
WHISK eggs and sugar together until pale and fluffy, then stir in the lime zest.
SIFT together flour and baking powder. Fold gently into the batter until just combined.
GRADUALLY stir through cooled browned butter mixture in a thin steady stream, until just combined.
COVER with plastic wrap and allow mixture to rest for at least an hour in the refrigerator, overnight is better.
PREHEAT oven to 180 C. Butter two madeleine trays and dust with flour.
PLACE a tablespoon of batter into each indentation of the buttered and floured madeleine trays. Tap each tray lightly on your bench to make sure the mixture perfectly fills the scalloped ridges of each indentation.
BAKE for 6 – 8 minutes, or until golden and well risen with a classic raised hump on top.
TAP madeleines to release them from the tin. Allow to cool a little on a wire rack before dusting with icing sugar to serve. Best eaten on the day they are baked, suitable to freeze.

Like Loading...
This entry was posted in Baked, What I Love to Cook and tagged Afternoon Tea, Baking, Cake, French, Made From Scratch, Madeleines, Morning Tea, Sponge, Teacake. Bookmark the permalink.

10 Responses to Let Them Eat Cake. A Little Taste Of France. Madeleines With Browned Butter and Lime.