Posted on January 31, 2014 by thepaddingtonfoodie 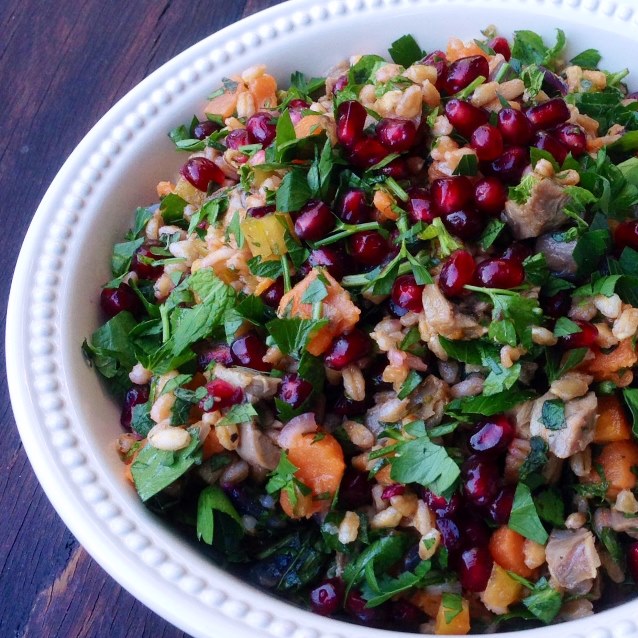 What a difference a year makes. Twelve months ago I don’t think that I would have been prepared to place this salad on the family dinner table. I can just imagine my suspicious teenagers trawling through their plates and removing the barley. Grain by offending grain. No matter that lamb shank and barley soup just happens to be one of their favourite winter warmers. My three darlings are quite particular eaters, these days introducing new food concepts usually requires at least three attempts. Probably a throwback from my dinner time rule when they were toddlers, refusal to eat any new food item would only be tolerated after they had tasted it on ten separate occasions. There was method in my madness as I had read somewhere that it can take ten attempts for your palate to accept a new taste or texture.

Since embarking on the 5-2 style of eating, I have been rediscovering all manner of grains and pulses, and incorporating them into my recipes. Not only are they very, very good for you but incredibly satisfying. Perfect for a fast day when the priority is to keep the hunger pangs at bay. My current grain obsession is for Italian farro, an ancient variety of emmer wheat.  It stays firm with a slightly chewy texture and nutty flavour when cooked making it an ideal addition for robust salads. Always buy Farro Perlato, which has been hulled to remove the outer husk, otherwise the grains will need to be cooked for up to an hour instead of just 15-20 minutes. Farro Perlato loosely translates on the packaging as ‘Pearled Barley’. True Farro Perlato can be a little tricky to source but will usually be available in a good Italian deli. It’ s perfectly acceptable to substitute regular barley; just cook according to the manufacturer’s instructions on the packet until the grains are just al dente.

The quantities given for this recipe are generous, and I had hoped that there would be substantial leftovers remaining for another fast day. A one cup serve is incredibly satiating yet delicious. The nutty barley marries well with the roasted sweet potato, soft leek and shredded lamb. In its early stages of assembly the flavours were redolent of a roast lamb dinner. I added parsley and mint for freshness and vibrancy and  ruby red jewels of pomegranate for sweetness and crunch. Given it was a fast day, I was restricted to just one 280 calorie serving for my dinner. My teenagers, however, were not. Not only did they devour two bowls each, they commandeered all the leftovers for their school lunches the next day. 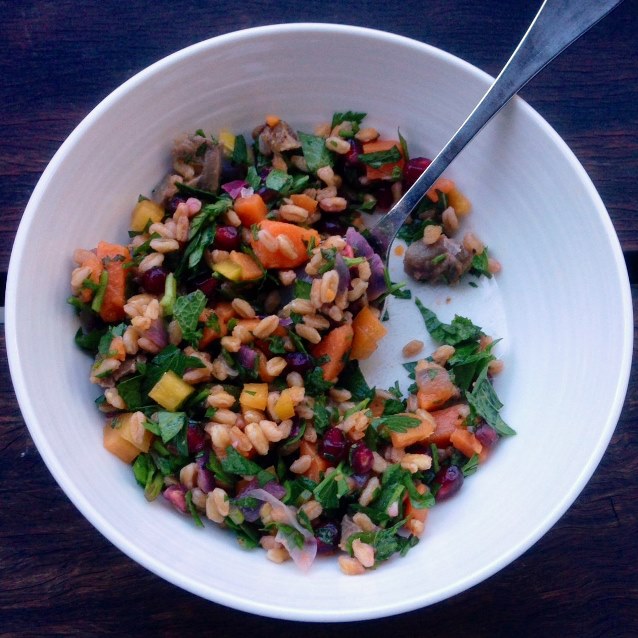 PREHEAT oven to 180 C. Line a roasting tray with baking paper.
HEAT  one tablespoon oil in a heavy saucepan. Brown shanks on all sides, remove to the prepared roasting tray with the whole, unpeeled sweet potatoes.
SEASON with sea salt and pepper and roast in a hot oven for about an hour until sweet potatoes are tender and meat is falling off the bone.
MEANWHILE cook the farro (pearl barley) in plenty of salted water according to the instructions on the packet, until the grains are tender but still firm to the bite. Drain, remove thyme sprig and place in a large bowl. Set aside to cool.
ADD leek, garlic, and thyme to the saucepan used to brown the shanks. Cook over low heat for 15 minutes until softened but not browned. Toss the leek mixture through the bowl of cooked pearl barley.
WHEN cool enough to handle, peel roasted sweet potatoes and finely dice the flesh.
REMOVE meat from the lamb shanks and shred into bite sized pieces with your fingers or a fork, discarding bones.
ADD diced sweet potato and shredded lamb to the pearl barley mixture, together with diced capsicum, pomegranate seeds, lemon zest, and shredded parsley and mint.
DRIZZLE over lemon juice and remaining tablespoon of oil. Season with sea salt and freshly ground pepper. Toss well to combine. Serve.