Passing Down The Baton Through The Generations. Judy’s Christmas Pudding. Our Family Recipe.

Posted on November 30, 2013 by thepaddingtonfoodie 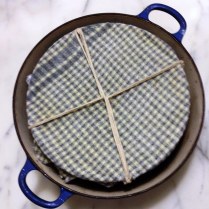 One of the enduring pleasures of this blog has been scribing closely guarded recipes that  grace the table at family  celebrations, transcending  the test of time. Last Easter I had the privilege of scribing and baking my grandmother’s Apple Strudel, and now our Aunt Judy’s Christmas Pudding. It is fitting that this recipe is posted on November 30, as superstition has it that the pudding must be made and put away in a cool, dark place to mature before the end of the month.

This particular  Christmas Pudding recipe is Judy’s favourite and has been gracing her family Christmas table for some fifty years. An original Australian Gas Company recipe circa 1923 or 1925, it was given to her by a kindly Mrs Smith soon after she was married. Not having grown up with the tradition of a steamed fruit Christmas  pudding I fell in love with this particular version with my very first bite. Rich and luscious, laden with dried fruits but nut free, it is incredibly light and moreish. Even after a long traditional Christmas lunch on a hot summer’s day.

The secret lies in using fresh breadcrumbs made out of three day old bread. For a lovely, light texture, the crusts need to be removed before the soft bread is pulsed  in the bowl of a large food processor.  And of course it goes without saying the breadcrumbs need to be mixed through the batter alternately with the flour by hand. Retro and old-fashioned, it really doesn’t get any more traditional than that.

Judy very generously gave  me access to her personal, hand written recipe book.  Here is the very straight forward, no nonsense seven step recipe as originally provided by Mrs Smith. Of course, having made the pudding under Judy’s guidance I have expanded on all the little techniques  in the metric version which appears at the bottom of this post. To achieve the correct quantities of ingredients it is easiest to use a set of scales, and in this instance I have abandoned my penchant for using cup measurements.

Prepare all fruit.
Cream butter and sugar, add well beaten eggs and brandy.
Stir all fruit in well.
Add breadcrumbs, sifted flour, salt, soda, grated nutmeg and spice.
Mix all together.
Put into pudding mould or prepared pudding cloth.
Place in boiling water and cook 6 hours on day it is made and 2-3 hours on the day it is to be used.
Serve with brandy sauce or custard.

We made the pudding over the course of a week. A  three generation extended family effort, that I hope will become a new tradition. First up was the preparation of the fruit. We spent a pleasant morning shopping for the ingredients, and afternoon chatting and chopping the fruit to a uniform size no larger than a small raisin. For posterity everyone had a go at stirring the pudding.

The recipe produces a  pudding mixture that fills a very large sixteen cup (four litre) pudding basin yet only calls for a scant six tablespoons of brandy.  In our collective wisdom we all agreed, given the provenance of the recipe, this must be a throwback to Prohibition era alcohol sensitivities at the time.  Judy’s advice was to use just enough brandy to moisten the fruit.  She also divulged that a little Cointreau added to the mix imparts a lovely flavour to the pudding.

The balance of  alcohol to fruit is at best an imprecise science. After consulting a number of modern day pudding recipes and in the interests of correctly scribing our inaugural attempt at pudding making we settled on 250ml of brandy and 75ml of cointreau to soak the metric equivalent of over one and a half kilograms of dried fruit. Generous, I know but remember the fruit can be left to steep in a cool, dark place for up to a week, and the pudding is steamed for a good six hours before being left to mature for up to six weeks before Christmas. In all likelihood the majority of the alcohol content will have evaporated.

We soaked our fruit in brandy and cointreau on a Monday and regrouped on the following Friday to make and steam the pudding. As we mixed the batter, Judy elaborated on Mrs Smith’s simple seven line pudding recipe. I feel incredibly lucky  to have been given the opportunity to include many invaluable little tips and tricks  Judy has collected over fifty years of pudding making experience in the revised metric version of  Mrs Smith’s original Australian Gas Company recipe. As always I  find it easiest to learn a new technique by watching and listening, and helping out a little. Here’s hoping this year’s Christmas pudding will be as wonderful as the last. The proof will be in the eating.

PLACE the raisins, sultanas, prunes, dates, cherries and peel into the pudding bowl. Add brandy and cointreau. Stir well to combine and cover with cling film. Allow to steep in a cool, dark place for at least three days or up to one week.

IN A LARGE mixing bowl cream the butter until soft, add the sugar and beat until light and fluffy.
ADD the eggs one at a time, beating well after each addition.
STIR in the fruit mixture, mixing well to combine.
SIFT the flour, salt, bicarbonate of soda and spices together into a medium sized bowl.
ADD the flour a few tablespoons at a time in alternate batches with the breadcrumbs. Stirring well to combine after each addition.
ADD a little more Brandy and Cointreau to the mixture, according to taste.
GENEROUSLY grease the pudding bowl with butter. Cut a piece of calico, or a clean tea towel, to size to fit the top of the pudding bowl with a 3 cm overhang.
SPOON the pudding mixture into the prepared bowl, firmly pushing the mixture down with the back of the spoon to ensure that there are no air pockets. Smooth the surface of the pudding with the back of the spoon.
COVER the pudding with the calico or tea towel lid. Secure by firmly tying a double-thickness of kitchen twine just under the rim of the pudding bowl. Trim off excess calico/tea towel  so that only 2cm extends below the around-basin string.
CUT a 150cm long piece of kitchen twine and fold in half. Make a double thickness handle  to use to lift the pudding out of the steamer, by securing either end tautly to  the twine tied around the basin.
PLACE a trivet on the base of a very large saucepan that comfortably fits the pudding bowl.
STAND the pudding bowl on the trivet and pour enough boiling water into the saucepan to come halfway up the side of the basin. Do not allow the calico or tea towel lid to come in contact with the water.
COVER the saucepan with a tight-fitting lid and simmer on low heat for 6 hours. Top up with boiling water, if necessary, to maintain the water level during cooking.
USING  the handles, carefully remove the pudding basin from the saucepan. Store until needed.
TO SERVE reheat pudding by steaming for a further two to three hours. Turn out onto a plate and flame with brandy. Serve with vanilla custard and brandy sauce.

11 Responses to Passing Down The Baton Through The Generations. Judy’s Christmas Pudding. Our Family Recipe.