The 5-2 Challenge. The Lowdown on Potatoes. Baked Potato Skins With Colcannon.

Posted on July 12, 2013 by thepaddingtonfoodie

Back in Sydney after days of holiday eating I’ve decided to squeeze in a fast day before the weekend. The bottom line? One fast day this week is better than none. Thankfully the 5-2 diet is proving to be a most accommodating eating plan. Most definitely the reason I persevere with it. With continuing cold winter weather I’m definitely craving comfort food. What to eat? Is there anything more satisfying than a baked potato? I know potatoes often get a bad rap because of their high glycemic index and I do acknowledge that I have been avoiding them like the plague on fast days, but with a little forethought they make a fabulous 5-2 meal.  All that is required is a little attention to portion size and care in the preparation. Here’s the lowdown.

Potatoes are rich in carbohydrates, calcium, magnesium, vitamin C and potassium. The healthiest way to eat them? With the skin on. Potato peel contains fibre and the majority of the nutrients lie just under the skin. To preserve those nutrients it’s better to bake potatoes whole in their skin, boiling leaches all those valuable nutrients directly into the cooking water.

One hundred grams of baked potato yields just 109 calories. Filling and nutritious, it is worth remembering that more often than not it is not the potato itself that is fattening but what is put on it that is. Butter, sour cream and cheese are all high in fat and gram for gram carry a higher calorie count than potatoes. That said recognising the calorie count associated with portion size is important. A handy rule of thumb  for estimating the energy value of a baked potato without toppings is as follows:

My take on a fast day baked potato? Baked Potato Skins  with Colcannon. Once roasted the potatoes are split in half lengthwise. The flesh scooped out ready to be mashed with a creamy leek and garlic milk infusion. Sauteed bacon, spring onions and cabbage  folded into the mash which is spooned back into the potato skins and baked in a hot oven until golden and bubbly. A luscious take on baked potato with not a skerrick of fat laden butter, cream or cheese. 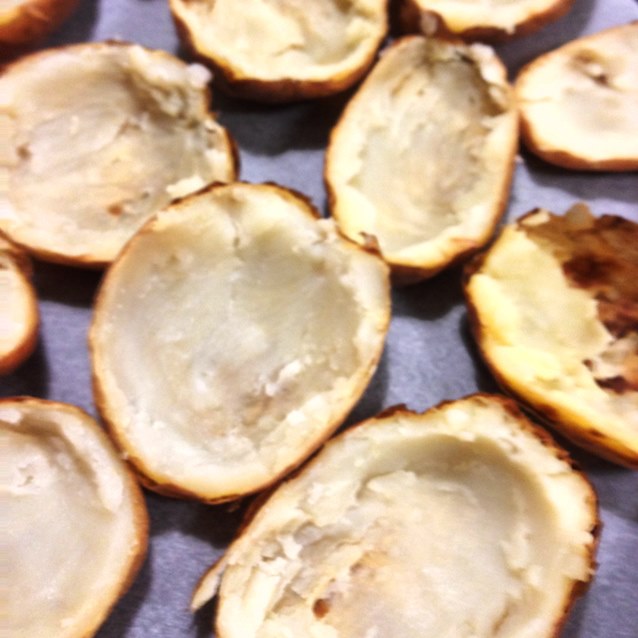 To get a crispy outside and creamy middle you’ll need a floury potato. In Australia, the best varieties are Dutch Cream, Desiree, Coliban or Sebago.

Prepare the Potato Skins
PREHEAT oven to 200 C.
PIERCE potatoes with a fork and bake on centre rack of oven for about 45 minutes until cooked through. Remove from oven and allow to cool a little before slicing the potatoes in half lengthwise and scooping out the flesh. Reserve the flesh for mashing.
PLACE potato skins on a lined baking tray ready to be filled with the colcannon. Set aside.

Prepare the Colcannon
PLACE milk, garlic, leek and bouquet garni in a small saucepan. Bring to a simmer over medium heat. Reduce heat to low and simmer gently until garlic is soft, 5 to 10 minutes.
DISCARD bouquet garni. Puree the mixture with a stick blender until smooth.
MASH the reserved potato flesh while still warm, gradually adding the milk mixture until the potatoes are smooth and fluffy. Depending on the preferred consistency all the milk may not be required. Keep warm.
HEAT a frypan or wok and cook bacon until brown and crispy. Add spring onions. Sauté until soft then add cabbage. Stir well to combine and continue to sauté until the cabbage begins to wilt.
STIR the sautéed cabbage, bacon and spring onions into the mashed potato. Season with salt and pepper.

To Assemble the Potato Skins
PREHEAT oven to 180 C.
SPOON the colcannon evenly into the prepared potato skins.
BAKE filled potato skins for 15 minutes until the filling is hot and bubbling. Serve immediately with a green salad.

Like Loading...
This entry was posted in Small Bites, Vegetables, What I Love to Cook and tagged 5-2 Diet, 5:2 Diet, Bacon, Cabbage, Colcannon, Fasting Diet, Potato, Vegetables, Winter. Bookmark the permalink.

6 Responses to The 5-2 Challenge. The Lowdown on Potatoes. Baked Potato Skins With Colcannon.