Posted on June 29, 2013 by thepaddingtonfoodie 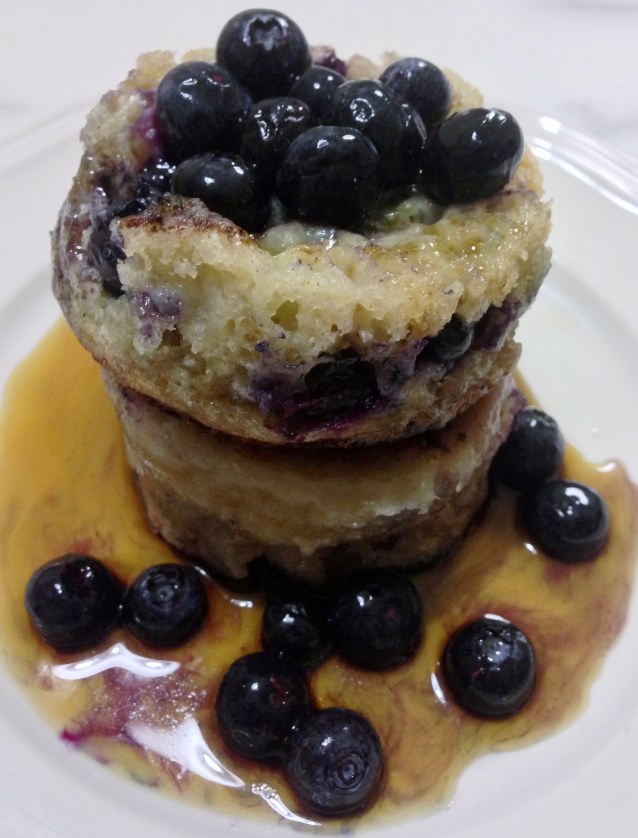 Last week I made crumpets for the very first time. This week it’s still raining and we are all beginning to feel just a little bit stir crazy. With the weather too awful to willingly venture out and ever present mouths to feed I decided to try my hand at more crumpets. On the back of my carton of buttermilk there is a recipe for blueberry and buttermilk pancakes. I’ve made these before to great acclaim. To my mind they closely resemble giant pikelets. Not too much of a stretch from pikelets to crumpets so why not make a blueberry buttermilk  version.

The upshot?  I substituted buttermilk for regular milk and followed my regular crumpet recipe to the letter. At the very end I tossed a cup of blueberries in a little sugar and lemon juice and incorporated the mixture into my crumpet batter. The addition of the buttermilk produced a very light, fluffy and well risen crumpet. I realised very quickly that I needed to spoon far less batter into my crumpet rings to allow the crumpets to cook through and avoid potential burnt bottoms. Adding sugar and fruit contributes to the caramelisation of the crumpets so it is important to constantly monitor the temperature of the pan as they cook, and turn the flame to low if the bottoms are browning too quickly. Be careful though. It’s a fine line between crumpets that are not quite cooked through and perhaps a little too brown underneath. To keep their shape the tops of the crumpets need to be nearly set before the rings are removed and crumpets flipped.

These crumpets were sensational served with butter, maple syrup and more fresh blueberries spooned over the top. True comfort eating for a dreary, rainy day.

MIX the sugar, buttermilk and boiling water in a jug and stir in the yeast. Leave in a warm place for 15 minutes until frothy.
COMBINE the flours in a large mixing bowl with the salt. Stir in the liquid and mix vigorously until smooth. Cover and leave in a warm place for between one-and-a-half and two hours until the batter is a mass of tiny bubbles.
MIX the bicarbonate of soda with 50ml warm water and stir it into the batter. Cover and stand in a warm place for 30 minutes.
TOSS blueberries in caster sugar and lemon juice. Add to the crumpet batter, stirring well to combine.
MELT the butter and use it to brush the inside of four crumpet rings. Heat a large frying pan on a medium-low heat and grease the pan. Put the rings flat into the pan and ladle batter into each, so they are no more than a third full.
COOK until mixture bubbles, small holes form on the surface and a skin forms on top (4-5 minutes). Monitor the heat of the pan and turn flame to low if the bottoms are browning too quickly.
REMOVE rings, turn crumpets and cook until light golden , about 1 minute. Keep crumpets warm in a tea towel while you repeat with remaining batter, thinning with a little extra milk if necessary. If the batter is too thick, the holes won’t be able to force their way through to the top, add too much liquid and batter will run out from under the rings.
SERVE immediately with butter, maple syrup and blueberries

Like Loading...
This entry was posted in Breakfast, Sweet Treats, What I Love to Cook and tagged Afternoon Tea, Blueberries, Breakfast, Brunch, Crumpets, Food, Lemon, Winter. Bookmark the permalink.