A Trio Of Italian Biscuits. A New Favourite. Rosa’s Shortbread.

Posted on June 20, 2014 by thepaddingtonfoodie 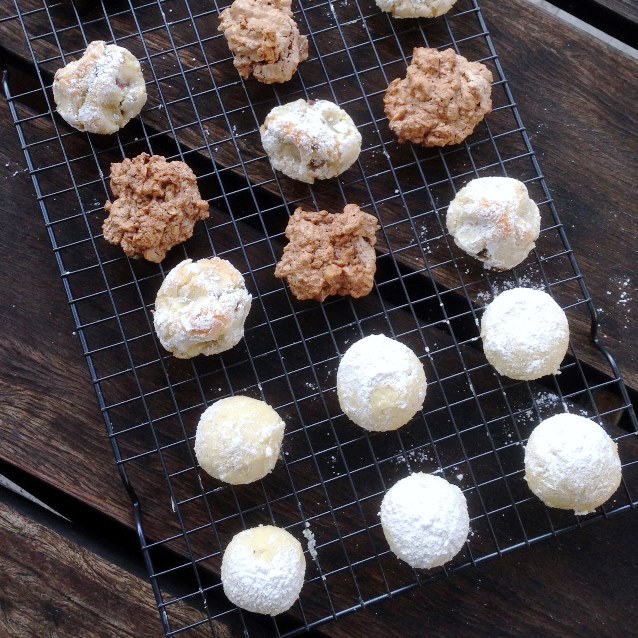 This weekend my daughters are visiting their grandparents interstate.Tucked into their luggage will be a box of hone baked treats. A trio of Italian biscuits. Sweet but tart Sour Cherry Amaretti (my father’s favourite), caramelised nutty nuggets of Brutti Ma Buoni  and something new.  Buttery and crumbly yet impossibly light, my new favourite Rosa’s Shortbread.

I’ve always been a firm believer that the very best recipes are handed down by word of mouth. You know the type. Closely guarded secrets with an aura of mysteriousness surrounding an elusive ingredient or technique. More often than not they have been perfected  over many generations and make a much anticipated appearance at family celebrations and gatherings.  In our virtual  age where at a click of a mouse we can google recipes and ingredients to our hearts desire, it is so very special to be  handed such a recipe the old fashioned way.

These came to me via my friend Grace who has a veritable arsenal of  awesome recipes in her repertoire. Every time we speak, no matter the topic, we invariably meander onto food. What we’ve made, are making now or  might try making next. The upshot is whenever Grace mentions she has a recipe I might be interested in  I’m all ears.

This week our topic of conversation was baking, or more specifically a recipe for shortbread from Rosa who happens to be the  mother of another of our mutual friends Marianne. Rosa’s shortbread  is out of this world delicious and unbelievably moreish. Gone in an instant. So much so I’ve already baked three batches this week. I’m so excited to be sending one of those batches to my mother. I know she will love and appreciate it as much as I do. Thank you Grace and Rosa for a beautiful recipe.

Even though there is no leavening agent in these biscuits, they rise beautifully in the oven and and have a gorgeously light, crumbly texture. The secret is in the beating of the butter until it is creamy and white. It is  important to remove the butter from the fridge several hours ahead. If  it is too cold it will not cream well and the shortbread will not have sufficient aeration to rise.

PRE HEAT oven to 180 C.
PLACE softened butter, salt, sugar and vanilla into a large mixing bowl and beat until white and creamy, at least 10-15 mins
STIR in almond meal and  plain flour.
ROLL into balls a little smaller than a walnut. The mixture will make 30 -35 balls.
BAKE for 10-15 mins, middle rack position in a 180 C oven. Don’t allow the shortbread to brown.
COOL slightly then roll in a mixture of sifted icing sugar and vanilla sugar.
STORE in an air tight container.

Like Loading...
This entry was posted in Baked, Sweet Treats, What I Love to Cook and tagged Almond, Baking, Biscuits, Butter, Italian, Shortbread, Vanilla. Bookmark the permalink.

5 Responses to A Trio Of Italian Biscuits. A New Favourite. Rosa’s Shortbread.